A joint Wound Healing Symposium, hosted by the Australasian Wound and Tissue Repair Society (AWTRS) and the Future Industries Institute (FII) at the University of South Australia, was held in Mawson Lakes on 27th October 2017. Written by Stuart Mills (FII, UniSA) 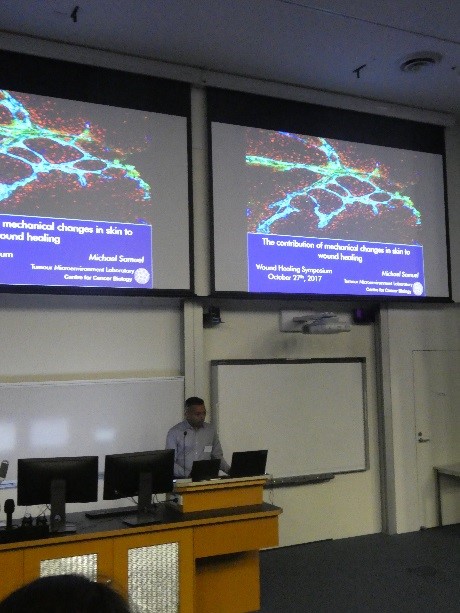 To start proceedings there were the opening remarks from Dr Xanthe Strudwick (Fii, UniSA) followed by a welcome from the Director of the Future Industries Institute Professor Emily Hilder.  The first talk by Associate Professor Michael Samuel (CCB, UniSA), demonstrated the importance of how mechano-reciprocity in the skin can affect the wound healing process.  He highlighted how increased stiffness in the extracellular matrix (ECM) could stimulate mitogenic signalling pathways to promote cell proliferation and RhoA activation, which was referred to as ‘outside-in’ signalling.  This mechanism was shown to work in conjunction with ‘inside-out’ signalling where Rho-ROCK signalling increased the production of ECM production resulting increased matrix stiffness and epithelial proliferation.  If left unchecked these two processes can result in a hyperproliferative epidermis and tumour formation.  Prof Samuel’s work was focused on identifying the moderator molecule of this process, which could then be targeted as a therapeutic target for the treatment of diabetic wounds.  Dr Rachael Murray (IHBI, QUT) then followed presenting her work on MMP14 and how this protease can be targeted to improve wound inflammation.

Dr Murray showed how MMP14 was trafficked intracellularly through macrophages and released to alter the differentiation state of macrophages within the wound from an M1 to an M2 phenotype to help resolve the proinflammatory state of the macrophages.  The third speaker from the first session was Dr Lyn Wise (University of Otago, New Zealand), who was investigating the effects of orf virus derived IL-10 and VEGF-E on wound healing.  Her work demonstrated how the IL-10 and VEGF-E could modulate gene expression in cultured equine fibroblasts.  In addition to this, her studies also showed that when IL-10 and VEGF-E were used to treat wounds on the legs of horses there was an improvement in epidermal and vascular growth, in the scar tissue from these wounds.  The final speaker of the session was Dr Zlatko Kopecki (FII, UniSA) who spoke about the role Flightless I plays a role in the healing of wounds infected with S.Aureus.  He talked about how Flightless has been shown to play a role in TLR signalling and inflammasome activation and how regulation of flightless could potentially result in the faster healing of infected wounds.  There was then a break in proceedings for a tea break and to view the posters, which were assessed by Dr Murray and Dr Farrugia for the poster prizes, which were awarded at the end of the day. 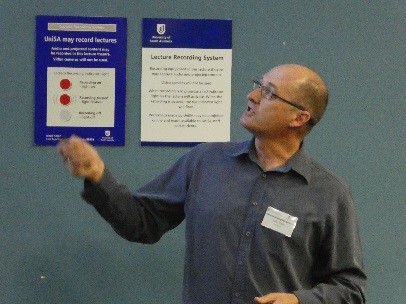 The opening talk was given by Dr Guilherme Pena (University of Adelaide) who gave a sobering talk on the clinical perspective on diabetic wounds, their incidence, cost and impact on hospitals and the Health Care System. This was followed by a presentation from Prof Stuart Pitson (CCB, UniSA) on how his group were looking at targeting sphingolipid signalling to improve diabetic healing.  They were able to show that sphingosine kinase 1 (SK1) knockout mice had impaired healing and that attenuating the

SK1 activation could potentially serve as a therapeutic target for improving diabetic healing.     Dr Stuart Mills (Fii,UniSA) followed this giving a talk on how Flightless I can act extracellularly and intracellularly to inhibit TLR signalling.  This was shown to result in a delay in the onset of inflammation during acute and diabetic murine wound healing, which resulted in an overall delay in the healing process.  The final talk of the session was from Dr Endre Szili (FII, UniSA), who gave a very interesting talk on how cold atmospheric plasma can be used to generate reactive oxygen and nitrogen species (RONS) in tissue to potentially improve healing outcomes.  There was then time to enjoy the beautiful Adelaide weather and to stop for lunch. During the lunch break members of the AWTRS attended the AGM where Dr Murray and Prof Cowin gave an update on the latest news from the AWTRS.

The first speaker was Prof John Greenwood (University of Adelaide) who spoke about a Biodegradable Temporising Matrix (BTM), which he has helped develop and is currently using, at the Royal Adelaide Hospital, for the treatment of burn wounds with impressive outcomes.  The second speaker was Dr Brooke Farrugia (University of New South Wales) who spoke about glycosaminoglycans (GAGs). Dr Farrugia highlighted how different GAGs and proteoglycans can have varying effects on the wound healing process and how these proteins can be modified to improve healing responses.  Dr Farrugia was followed by Prof Tarl Prow (Fii, UniSA) who described the benefits of using skin microbiopsies that he has helped to develop.  These microbiopsies can collect just 100-400 cells, which can then be used for diagnoses whilst creating minimal damage to the skin.  Prof Christina Bursil (SAHMRI) then spoke about how the use of high density lipoproteins (HDLs) can be used to treat diabetic wounds to help repair the vasculature, which is often damaged in diabetic wounds.  Dr Leila Cuttle (IHBI, QUT) followed this presentation and described how she has been able to develop a system of measuring biomarkers in burn wounds to determine the severity and depths of the wounds, which is not often apparent via a visual assessment of the injured skin.  Dr Anton Blencowe (FII, UniSA) spoke of his Zeogen dressing, which is specially formulated to deliver oxygen into the wound to improve healing.  He also spoke on iodine polymer coated silicone dressing, which have shown potential to be used as an antibacterial dressing.  The final speaker of the day was Prof Allison Cowin (FII, UniSA) who described her fascinating work on the development of a stem cell dressing, which was shown to accelerate healing in both acute and diabetic wounds in mice and also in acute excisional wounds in pigs.