The Australasian Wound and Tissue Repair Society (AWTRS) hosted its second scientific meeting at the Perth Convention and Exhibition Centre, Perth, Western Australia, 22-24 March, 2010. The goal of the event was to exchange the scientific information on current trends and developments in the field of wound healing and tissue repair research. This meeting aimed to provide a socially interactive environment for the young investigators enabling them to learn from experienced scientists, reflect on their work and current challenges. Similarly, experienced researchers were provided with an opportunity to exchange ideas and discuss future collaboration opportunities. More than 100 delegates, many of them young Australian scientists, at the beginning of their career, participated in this two day-long event.

The opening plenary on the first full day covered immunity in wound healing and Paul Martin from Bristol University reviewed wound repair and inflammatory response in models of inflammation in the Drosophila embryo and in the translucent zebra fish larval tail. Paul Martin elaborated on embryonic tissue healing which resolves without leaving a scar – a process thought to be due to a reduced inflammatory response. Paul Martin’s group have discovered several wound expressed genes, including osteopontin, which have been identified as important in guiding migration of macrophages towards wound sites. The audience was captivated with Paul’s informative presentation complimented by high quality audio-visual aids, including digital video images of dynamic behavior of fluorescently tagged immune cells. 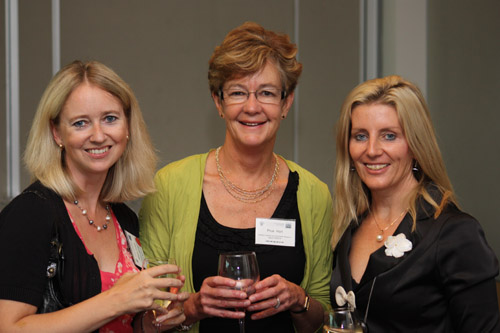 Complimentary to the information given in Paul Martin’s presentation, Rachael Murray from the Children’s Hospital at Westmead, Sydney, further emphasized the importance of macrophage migration into wounds and elaborated on important trafficking pathways required for macrophage migration and secretion of metalloproteinases. On a different note, Prue Hart from the University of Western Australia spoke about the importance of Vitamin D in the skin and reminded that 80% of vitamin D comes from UV irradiation of skin and only 20% from the diet. Prue Hart warned the delegates that many of the office workers of the sunniest state of Australia – Queensland don’t get enough vitamin D. According to Prue Hart and her team, vitamin D3 regulates proliferation and enhances differentiation in keratinocytes, as well as stimulates antimicrobial peptide production. Prue’s presentation convinced me to recommence my lunch time walking and
outdoor exercising commitment.

The President of the AWTRS and my mentor A/Prof Allison Cowin spoke about the actin-remodelling protein Flightless I – an important regulator of wound repair. Allison Cowin discussed the function of secreted and cytoplasmic forms of Flightless I and suggested that this protein could be transported to the cell surface via late endosomes and may have important extracellular activities during wound repair.

During the next session titled as “Regeneration” Jemma Evans from Uterine Biology Laboratory, Monash Medical Centre in Melbourne reminded the delegates of an interesting fact – postmenstrual endometrium repair is completely scar-free. With up to 450 cycles of scar-free resolution, the endometrium presents a unique opportunity to study scarless repair. Similarly to fetal wounds, this is a motivating area of research and may help us to better understand the normal and abnormal process of adult wound healing. Besides, collecting menstrual flow can’t be any worse than collecting fluid from a chronic wound. 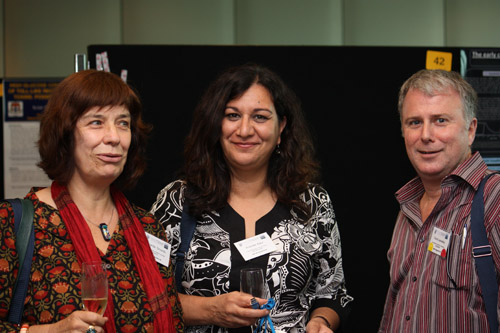 It was the next session that highlighted the fact that the process of research followed by translation to practice takes a long route. Such translation of research to practice is the goal of much of our research. Indeed, research provides components that are assembled together with components made in other research centres, to create a body of knowledge that ultimately may lead to better wound outcomes. In this special presentation, Zee Upton – Vice President of AWTRS and the leader of Tissue Repair and Regeneration Program, Institute of Health and Biomedical Innovation, Queensland University of Technology, spoke about the Wound Management Innovation Cooperative Research Centre.

With 24 partners, The Wound Management Innovation CRC is a collaborative research initiative aimed to transform wound outcomes by developing novel wound products and translating best practice wound care into clinical settings. Of the $130 million provided by the government for world-class collaborative research and innovation the Wound Management Innovation CRC has received $27.9 million over 8 years. Congratulations are extended to Professor Zee Upton as we can envisage and anticipate innovative therapeutic approaches based on the ground-breaking work of the Wound Management Innovation Cooperative Research Centre. Speaking of novel wound healing agents; Geoffrey Mitchell of the University of Queensland School of Medicine introduced preclinical data suggesting effective chronic wound resolution following topical application of OPAL A.

OPAL A is paw paw pulp, which is applied to wound surfaces in the form of a 30% cream. OPAL A is believed to be an effective vasodilator with positive influences on perfusion of the vascular bed.
The plenary the following day discussed the material engineering in regenerative medicine. We were privileged to have Jeffrey Hubbell – a world-class speaker, come to Perth and talk about his research. Jeffrey Hubbell, of the Institute of Bioengineering, Lausanne Switzerland, spoke about matrices that can be used to display bioactive peptides and proteins, as well as genes with suitable nonviral vectors. Jeffrey Hubbell’s fibrin and synthetic hydrogel scaffolds are very fascinating as cells are able to migrate within these three-dimensional scaffolds. Jeffrey Hubbell and his team have engineered molecular variants of the 9th and 10th type-III repeat of fibronectin and explored the ability of such matrices to accelerate mesenchymal stem cell differentiation along an osteogenic pathway. Jeffrey Hubbell and his colleagues demonstrated that exposure to a recombinant dimer of the 9th and 10th type-III repeats lead to more extensive interaction with alpha 5 beta 1 integrin and enhance a substantial increase in osteodifferentiation. Apart from sharing his research findings Jeffrey Hubbell has given us a glimpse of the breath taking view of his office window, which overlooks the beautiful lake of Geneva. Thank you, Jeffrey; your pictures have made me jealous. 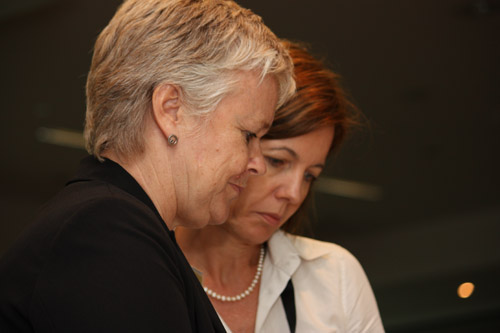 We were pleased that our next speaker – Leigh Parkinson from Fiona Wood’s Burn Injury Research Unit, University of Western Australia, was able to join us at the conference and present his PhD project findings. Leigh returned from his trip to America on Sunday only to find his house in Perth flooded with water due to that storm we witnessed on Monday the 22nd of March. In his work, Leigh Parkinson developed an aluminium oxide template preparation to generate membranes with differing nano-pore sizes enabling epidermal and dermal cells to adhere to these membranes, which could potentially be used as a dressing or as a delivery vehicle for an “upsidedown transplantation” of cells. Dedee Murrell’s work was also based around delivering cells to a wound.

Professor Murrell of the Department of Dermatology at St George Hospital in Sydney presented her findings of the first double blind placebo-controlled randomized trial of intradermal cultured allogeneic fibroblast injections in Recessive Dystrophic Epidermolysis Bullosa – skin blistering disorder, which is particularly devastating in children. Dedee Murrell and her colleagues found that the rate of healing in the treated sites using both the cultured fibroblasts and placebo were significantly greater than untreated complimented by a significantly higher collagen VII production in the treated wounds. This may imply that the injection alone enhances the healing of blistered wounds.

As part of the final session titled “Chronic Wounds – Mechanisms and Diagnostics”, four researchers two of whom were international presenters, spoke about the current developments in the area of chronic wound healing. Laura Edsberg of the Center for Wound Healing Research in New York, USA and Sandra Loerakker of Eindhoven University of Technology, The Netherlands have presented their research findings concerning pressure-related injuries. Laura Esberg collected wound fluid samples from 50 pressure ulcers at 15 time points within 42 days. She measured and compared the changes in the biochemical profile of the wounds to identify trends in healing and non-healing pressure ulcers and found that wound outcome was correlated with the biochemical profile of the wound. On the other hand, Sandra Loerakker investigated the role of ischemia in an in-vivo rat model of pressure-related deep tissue injury.

Using Magnetic Resonance Imaging (MRI) as a tool to measure reperfusion following a tourniquet induced muscle damage, Laura concluded that releasing the tourniquet after 4 hours leads to reperfusion, whereas no restoration of perfusion is observed after 6 hours of tourniquet-induced pressure. Two concluding presentations have discussed the damaging influence of diabetes on wound healing. Frances Henshaw of the University of Sydney, discussed the role of Connective Tissue Growth Factor in an in-vivo rat model of diabetic wound healing, whereas I introduced data related to the influence of Flightless I protein in streptozotocin-induced mouse model of excisional wound healing.

In conclusion, I take this opportunity to thank the members of the organizing committee for making the AWTR 2010 conference possible and for setting out a well planned program and orchestrating this worthwhile event. I hope that the delegates of this conference have enjoyed its relaxed and informal atmosphere as much as I have. I look forward to our next meeting in Sydney, 2012.